Home/News / Article/Emergency Pendant Alarm for Seniors – How They Work.
Previous Next

John Mathieson is a 77 year old senior living in Newcastle, NSW. When John was 72 he found out he had a bone condition that caused his bones to become weaker than they normally would be for someone his age. Recently, John has started to notice that he sometimes can become a little unsteady on his feet and about a year ago, he fell over on the footpath while out walking with his wife. He didn’t break any bones in that fall but he really banged himself up. John’s wife is active and needs to know that when they’re not together John is able to get help fast if he takes another fall. So recently John decided he needed an emergency pendant alarm with some sort of automatic fall detection built in. It was soon after that incident that John made sure he had a Live Life mobile alarm.

John’s Live Life emergency pendant alarm for seniors will work if he took a fall down the stairs and is knocked unconscious, which gives his wife Cathy great peace of mind. The way this works is that his emergency pendant alarm has an “accelerometer” inside it. It’s very clever at detecting impact (or deceleration). When it senses a fall it vibrates and carries on and “beeps” loudly for 20 seconds. If it’s a false alarm then John can just “click” the SOS button to cancel it. But if he’s unconscious or unable to move, he won’t be able to cancel it and so it’ll send a text message to his family/friends saying he’s had a fall and the text message will show his exact location on Google Maps before it starts to call his loved ones one by one. John’s emergency pendant alarm has a built-in speakerphone and microphone allowing loud and clear 2-way voice when a family member answers his emergency call. 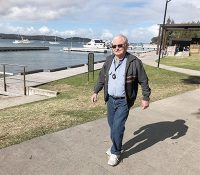 John is also still very active. He still flies his light aeroplane at his local airfield and heads out on his business in the local area nearly every day. He drives a lot to visit family, go shopping, he goes to Church and lot’s more. So he needed an emergency seniors pendant alarm that works everywhere he goes, not just at home. John’s emergency alarm pendant works everywhere in Australia where there is a Telstra mobile signal, encouraging him to get out and about and to have no reason to stay home instead.

One of the other great things that Cathy in particular loves about Johns Live Life emergency pendant alarm is that when she’s out and about she can call John on his mobile alarm if she needs to speak to him. John’s Live Life mobile alarm rings once and then answers in crystal clear 2 way voice, allowing Cathy to check he’s okay. She can then confidently stay out and about knowing all is okay at home.

John tells me that his kids also tend to contact him these days by calling him on his emergency pendant alarm rather than calling on his landline phone. He says he prefers this as he’s never liked getting up and walking to pick up his phone. John says “the kids once bought me a mobile phone but I was notorious at not answering it. These days though they speak to me more often by calling my Live Life emergency pendant and the quality of the voice call is the same as speaking on a high end mobile phone in speakerphone mode. I don’t even need to press a button to answer the call as the emergency pendant alarm goes straight to 2 way voice after one ring. If I want to end the call I just presses the SOS button.”